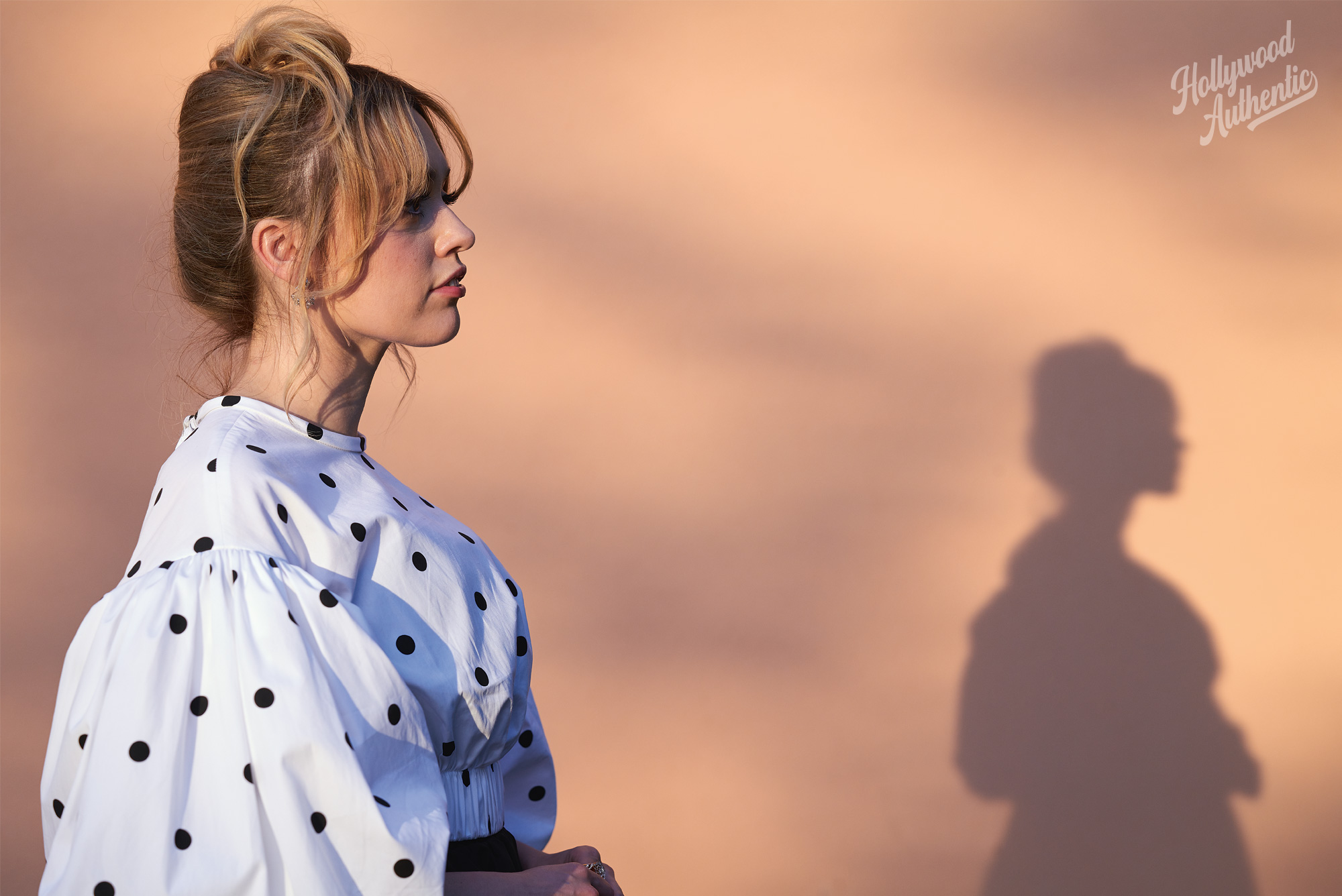 Aimee Lou Wood has just stepped inside her house having touched down in the UK from Toronto (and before that, Colorado and Venice), but she’s energetic and lively, just as you would expect from seeing her on screen. She’s currently in film-festival mode, promoting new project Living, and this evening she will head off for a BAFTA event. ‘I thought I would just decide that time zones aren’t real… but it didn’t quite work out that way!’ she laughs.

It’s an exciting time for the 28-year-old. Living is her first lead film role, starring alongside Bill Nighy in an adaptation of the much-loved Japanese 1952 film Ikiru, which was co-written and directed by Akira Kurosawa. The story is kept largely the same, but with the setting seamlessly transposed to post-war London. Nighy is a pen-pushing civil servant working in the town planning department of London’s County Hall, whose rather humdrum existence is upended when he is dealt a terminal cancer diagnosis and given less than a year to live. Keeping this news largely under his (bowler) hat, he searches for meaning and is ultimately inspired to do something worthwhile in his final days via an unexpected friendship with his vibrant young co-worker, Margaret Harris (Wood).

Wood shines as Harris, balancing humour and naivety with quiet ambition, and joy for the small things in life (such as her character’s first ice-cream sundae at Fortnum & Mason). Her wide-eyed pathos is genuinely affecting, and she has natural chemistry with Nighy, for whom she has nothing but praise.

‘Bill is just amazing,’ she enthuses. ‘I’ve loved him forever, so it was a bit of a moment when we went for lunch – me, him and Oliver Hermanus, the director – and I was like, “be cool, be cool!” I did have a bit of a freak out, internally, but he would never have known, thank God!’ The admiration, it seems, is rooted in her respect for his skill: she admits that pivotal scenes with Nighy didn’t require her to act ‘whatsoever’. ‘There’s a scene we have in the pub together and when I left that day I could not stop crying because I’d just witnessed something so special,’ she says. ‘It’s the best acting I’ve ever seen up close.’

Living is Wood’s first major film role, and her next big-screen outing is in the upcoming Seize Them!, starring British comedy heavyweights Nick Frost, Paul Kaye and Jessica Hynes.

Before being catapulted to fame in her BAFTA-winning role as the guileless Aimee Gibbs on Netflix megahit Sex Education, Wood dabbled in theatre while studying at RADA (the Royal Academy of Dramatic Art in London). She returned to the stage in 2020 in a critically acclaimed version of Uncle Vanya in the West End. The Stockport native says that she was captivated by movies and shows as a youngster and recalls a theatre production of Beauty and the Beast that utterly entranced her. ‘I think I saw it about four times,’ she says, ‘but what was great was that I grew up watching everything. My mum would show me all the John Hughes movies and all the ’80s stuff. I always wanted to be Ferris Bueller! My dad showed me all the Oscar winners like Doctor Zhivago. So I had this quite nice breadth [of movies], and then obviously I started exploring my own stuff.’

Drama school was an eye-opener. ‘RADA was quite classical training and most of my peers got into acting through loving the theatre… but actually, looking back on it, it really was film for me, because I didn’t go to the theatre like other people. Some people at drama school grew up in London and would go to the Royal Court regularly from like the age of 11. When I went it was normally to see a pantomime.’

To begin with, she says, she wanted to be a writer. ‘I always had a really vivid imagination and I wrote plays and stories all the time,’ she says. But acting took over: ‘Drama helped me so much because it was where I could really express myself. It was also such a protective shield for me. Like it made school so much easier. Because I had, you know… I could be funny… it was like a comfort blanket for me.’ And it is liberating, she says: ‘Sometimes I feel more like myself when I’m acting, like there’s things I can’t express, usually, that I can through characters and from different people’s stories.’

‘I love Aimee,’ Wood says of her namesake, Aimee Gibbs in Sex Education, who has been a fan-favourite from when the series aired in 2019,due largely to the actor’s impeccable comic timing and the character’s eccentric sincerity. ‘I love how she’s so her own person and so in her own world and says things that are ridiculous with such conviction.’ Aimee’s ‘total space cadet’ character entered more complex and darker territory in season two when she became the victim of a sexual assault. The fallout has been sensitively portrayed over the course of two series.

‘I’m glad they took so much time with it and that it spanned over two seasons,’ Wood says of that plot narrative. ‘It is something that will always be with Aimee. It changed her. It’s not the kind of thing that just “goes away” and they depicted that honestly and delicately. With Sex Education, you can always guarantee that they’re gonna go deeper and deeper into a character, and Aimee was perfect for this storyline because she’s such an everywoman. She is someone who has such faith in people. It’s that sad thing where someone who is so optimistic begins to question the world. It was tectonic for her.’

Aimee Wood seems plenty optimistic herself, though, if a little tired. Warm, witty and chipper – despite the lack of sleep – she heads off for an evening at BAFTA, all smiles.

Living is released in the UK on 4 November; Gemma Billington is a writer for Brummell magazine